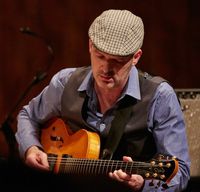 CONCERT SOLD OUT! The Austrian guitarist Wolfgang Muthspiel was previously known for his work with smaller bands, such as his highly praised quintet, with which he was already at the end of 2018 in the Elbphilharmonie guest. Now the son of a family of musicians from Styria is making a big splash: his 16-member Large Ensemble consists of a rhythm section, strings and brass section, conducted by Argentine big band leader and jazz musician Guillermo Klein.